Another week, another little step for progression on my own project.

I've committed to sinking my time solely into my own project, and getting a lot of passion about it and a great deal of fire. I'm planning that by this weekend that I'll have my character in my own game and ready to move around and animate. So exciting times.

I think once I get my character into my game and I can physically see what's going on and what needs work. I'll be really happy and can easily start putting pieces together and start adding things that would make my game look a lot better.

Texturing once again eating a lot of my time. I keep having to remind myself that it's just a prototype at the start. So with the mesh and character it's all just part of developing it. I figure it's very important to get the feel and and look. Then later on come back to it and fix it up. Polish it off.

There is always going to be two sides two how it should be done. Someone that is clear and I guess a little more talented could do it all in one sitting but I'm finding that the image in my head and my skill is a little different, So the best way to do it is to make base colours and build it up slowly.

Anyway enough ramble here's how the Evil Potato looks like. So this is the character that I did earlier in a concept art. 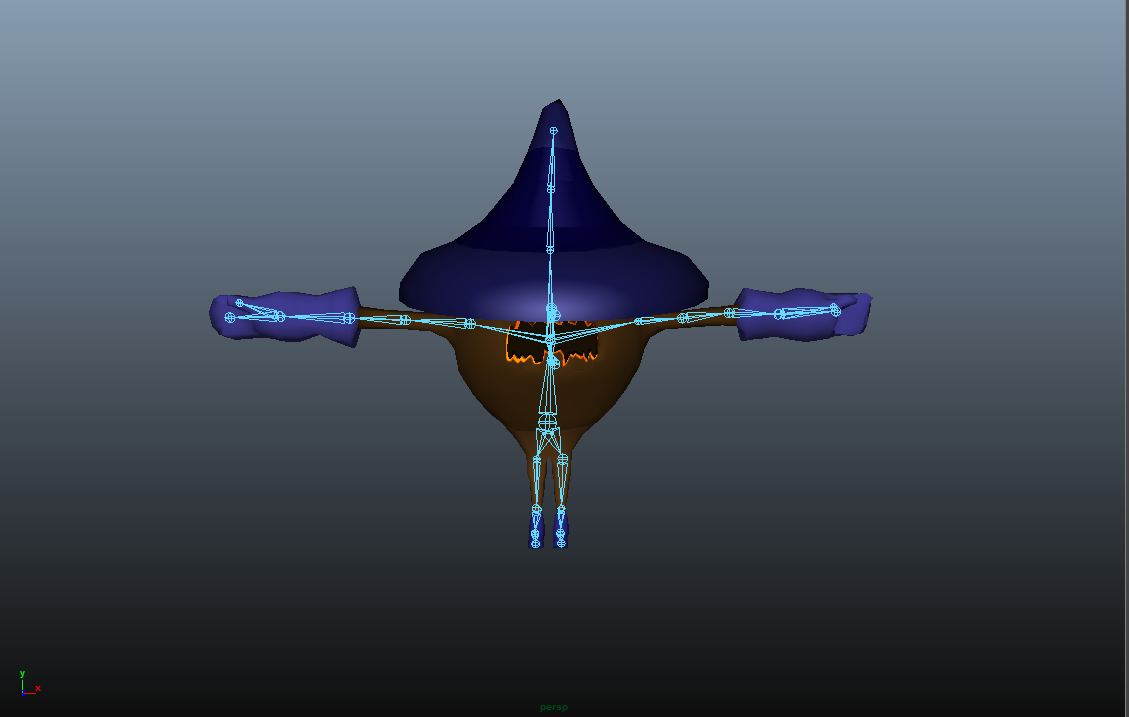 I've rigged my character and given him a base layer of colour. 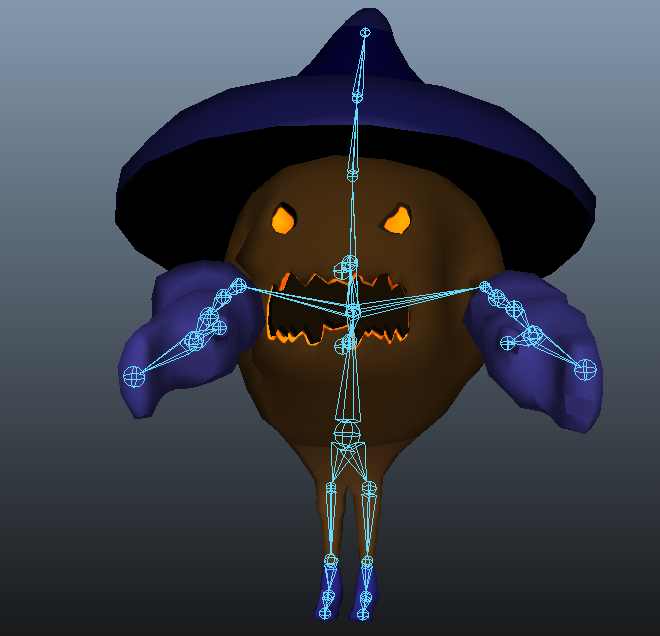 As you can see I need to skin the weights on my model to make not collapse on its self. 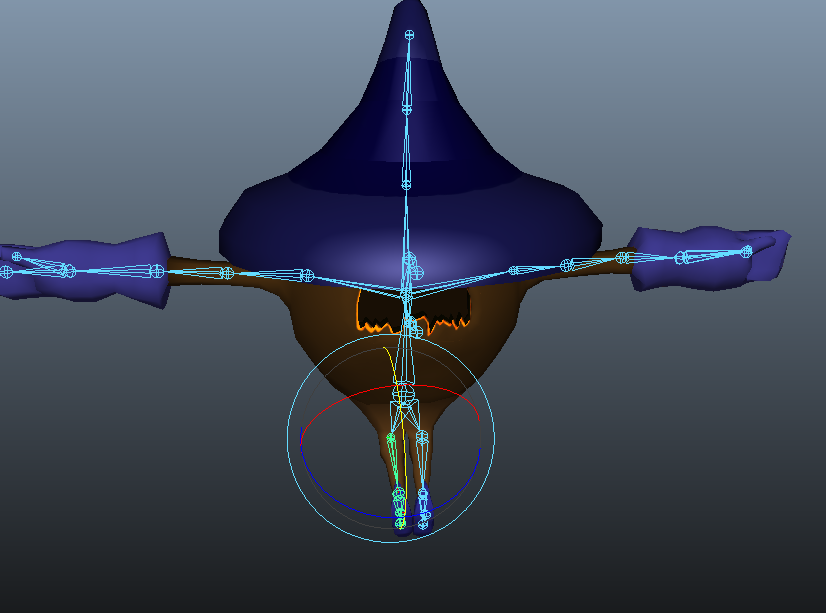 Reference image in case you've forgotten what he looks like

Posted by insert coin to continue at 23:55 No comments:

Modelling and Progression in Development of Game

Been just over a week since I've made a post. I had a huge productive week during Study Break.
Holy shit.. Study break and actually studied what is this nonsense :D

So to summarize what I did during my study break I first worked on alot of Halloween assets, to get ready for my development of my level. To make it look all scary and Halloween like, but more importantly to give me a feel of what I need to do and give it a bit of a story and direction 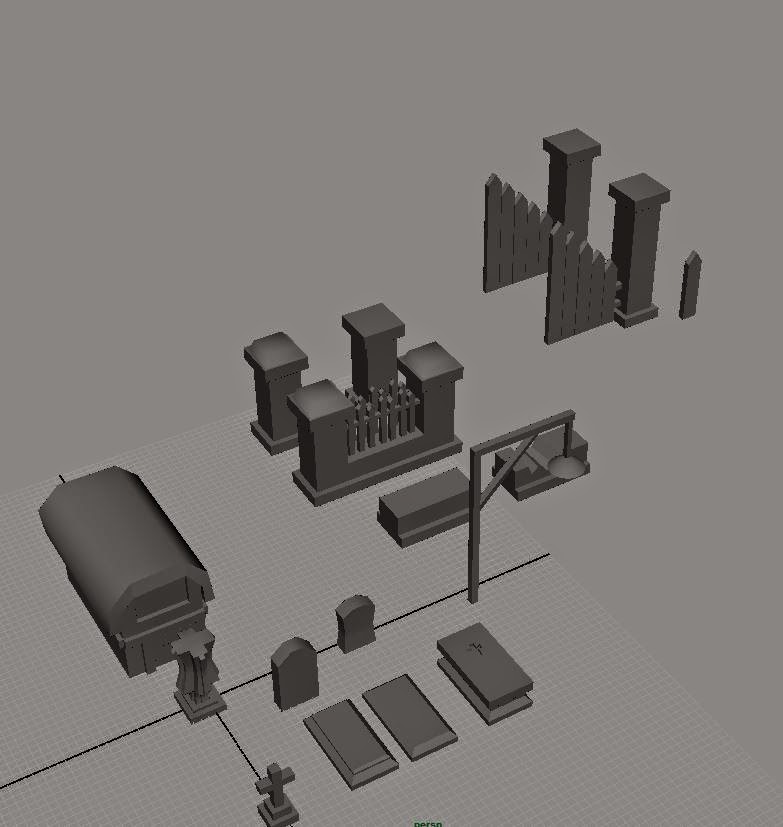 Then I worked on the random Generation of my Game. I wanted to make it like Diablo II one of my favorite games as a child. Random Generation has always interested me. I think it's something to do with the fact you can play a game and due to the generation it can feel different. 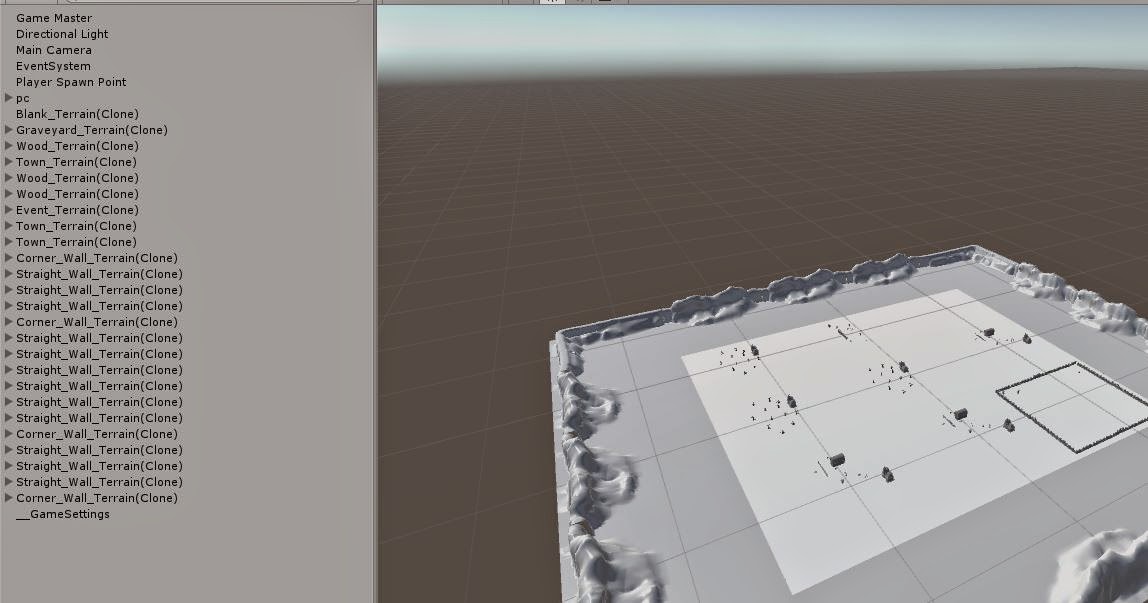 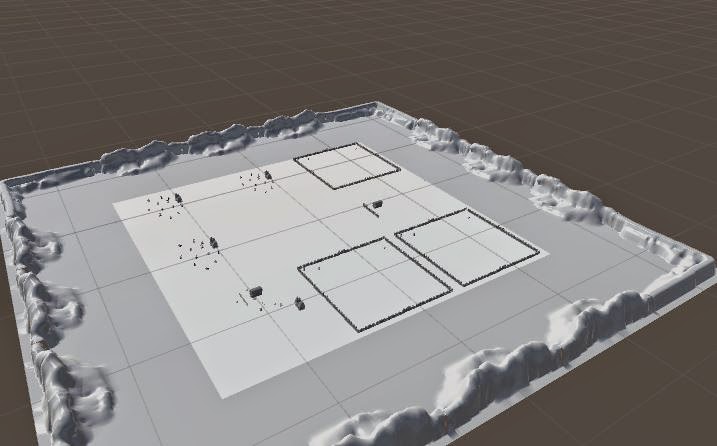 As you can see there is a huge difference between the two pictures above.
I've only got 6 tiles atm, and the outer edges are always mountain terrains to keep the player boxed in for the most part. Later on I will add an exit so that the player can progress. 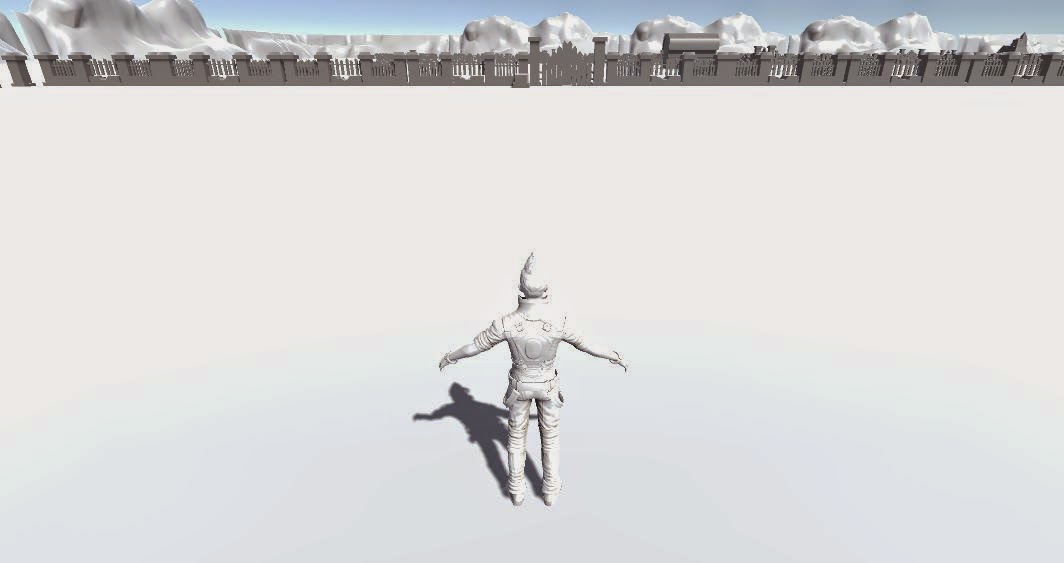 I added a new camera script to my character place holder as well as converted all the settings the player makes on the generation screen so that comes into the game aswell. 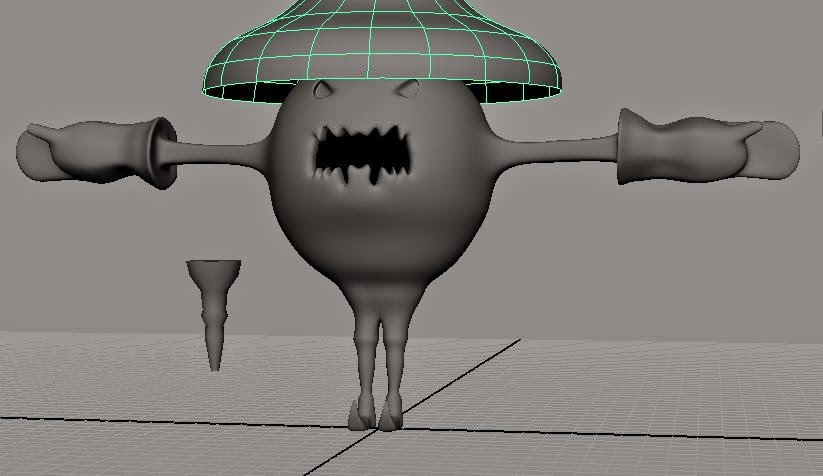 I then also worked on my Evil Potato that you may have seen some concept art for a week or so ago. Making him in Maya. And then i'll rig him and skin the weights so that he's ready to animate.
Obviously you can tell that with alot of my stuff it's un-textured. At some point i'll get on to it but atm I'm really trying to get a prototype level, So that I can get the general feel and flow to the game. 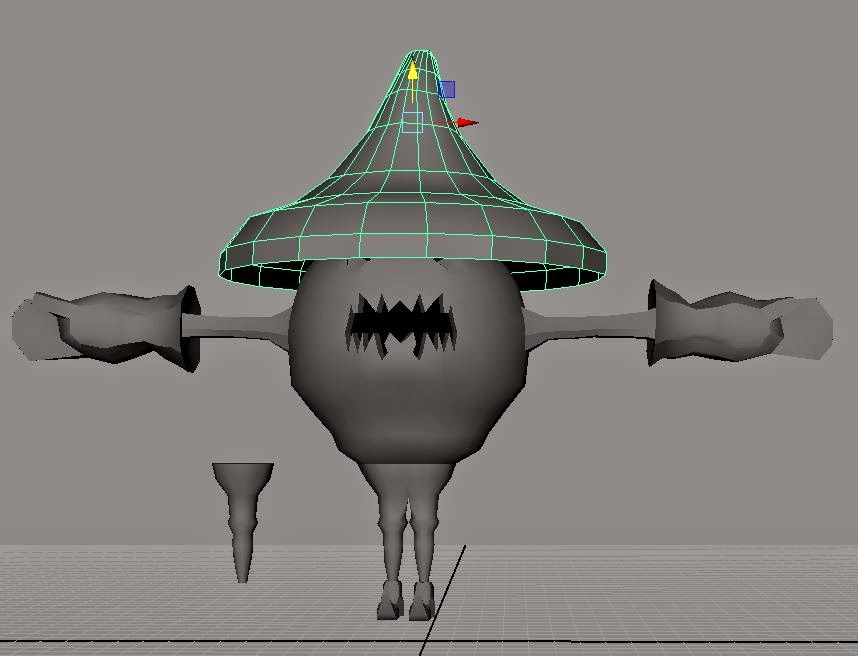 Posted by insert coin to continue at 17:48 No comments:

C# and AI in my Game


I've been busy this week, burning the candles at both end going over my programming a little bit more. Just practicing and getting down some simple code for my game that I'm hoping to present at the end of the year expo.

So I've designed a simple AI at the moment, it doesn't have any awake or detect function, so the cubes only attack dealing damage and are target table by my placeholder character. Took a little bit to get it down and make it work but sorted it out pretty fast. 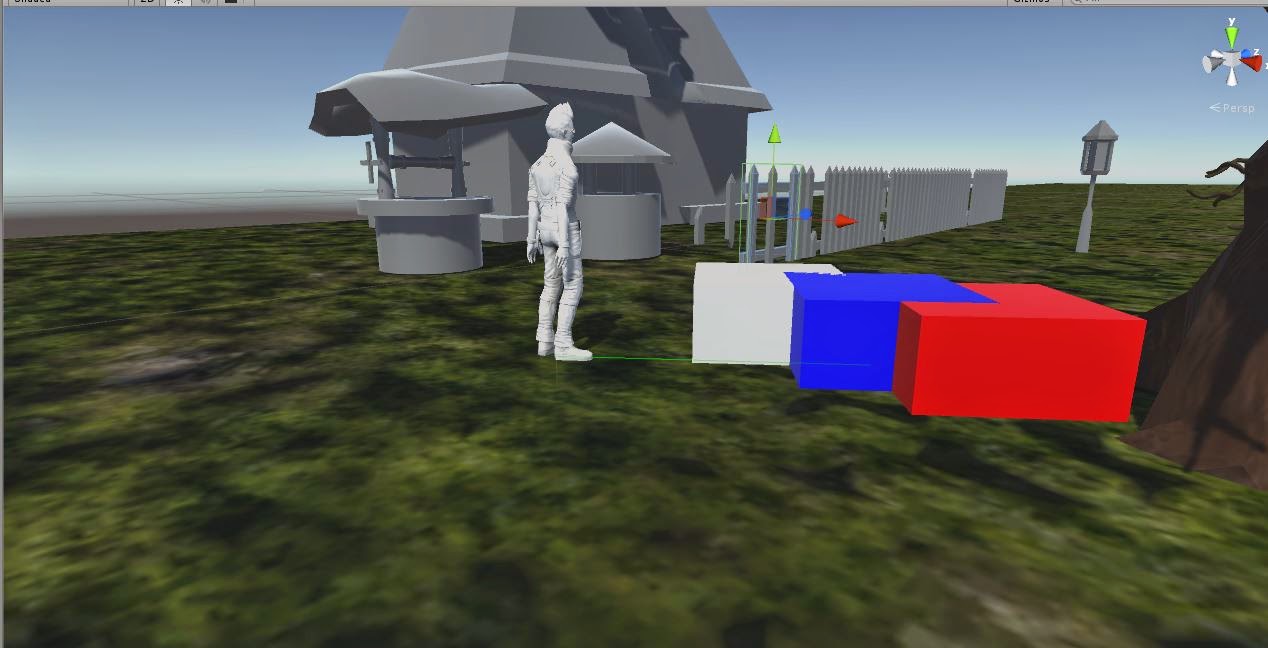 The cube's are place holder enemies at the moment. Red is my current target, blue is previous target and white is targeted enemy. By hitting Tab my character scrolls through the enemies closest to him in a list like manner.
Above you can see in the game i've designed some more assets such as a some fences and church like building. Aswell as the tree is finally in my game and looking nice after I had a little bit of problems with the UV maps not exporting from Zbrush. 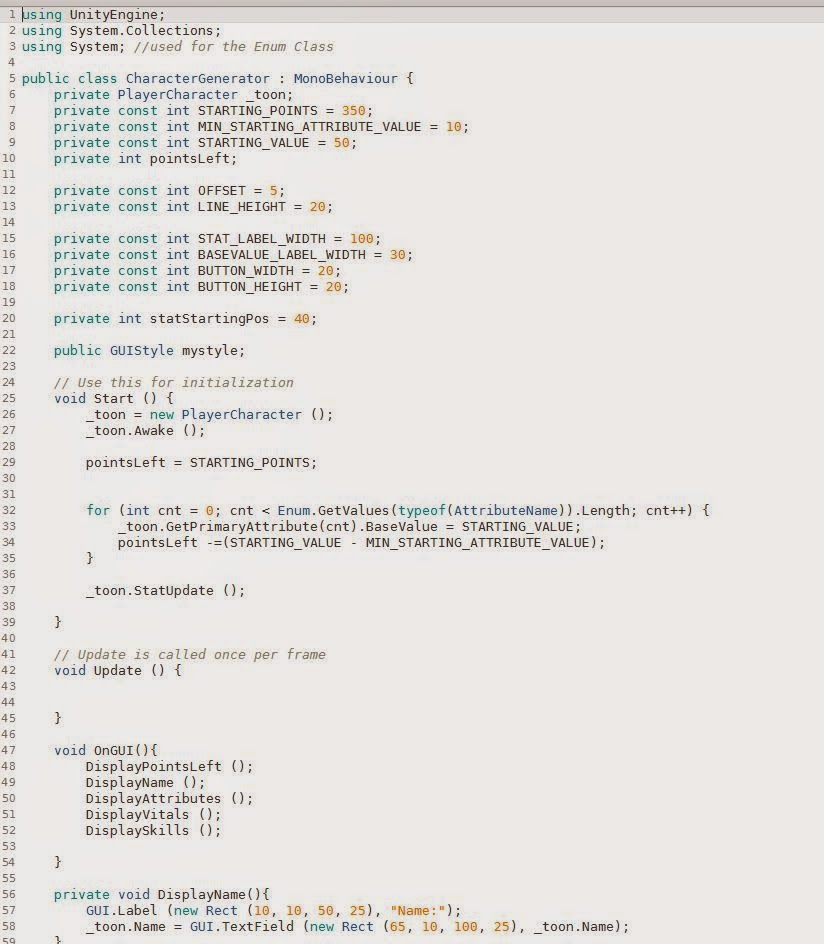 1 of the many pages of code I've written 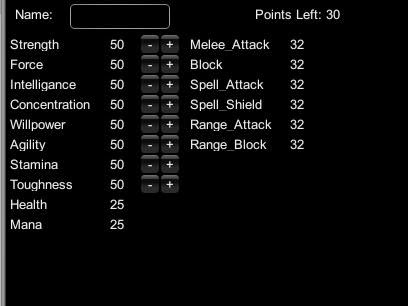 Above is the character creation screen I've made. The code is all finished and done I just need to design some buttons and find a nice looking font to replace it all with. And design a 2d image for the background to plug it in. But for the most part i'm really happy with how it's turned out.

Posted by insert coin to continue at 22:46 No comments:

Happy Easter to all!
Hope you all getting fat and eating chocolate, not really. Hope you are all safe and sound and doing what ever pleases you the most.

Been doing some designing and more creating of random creating of some game assets and just general modelling to see improve my skill sets. 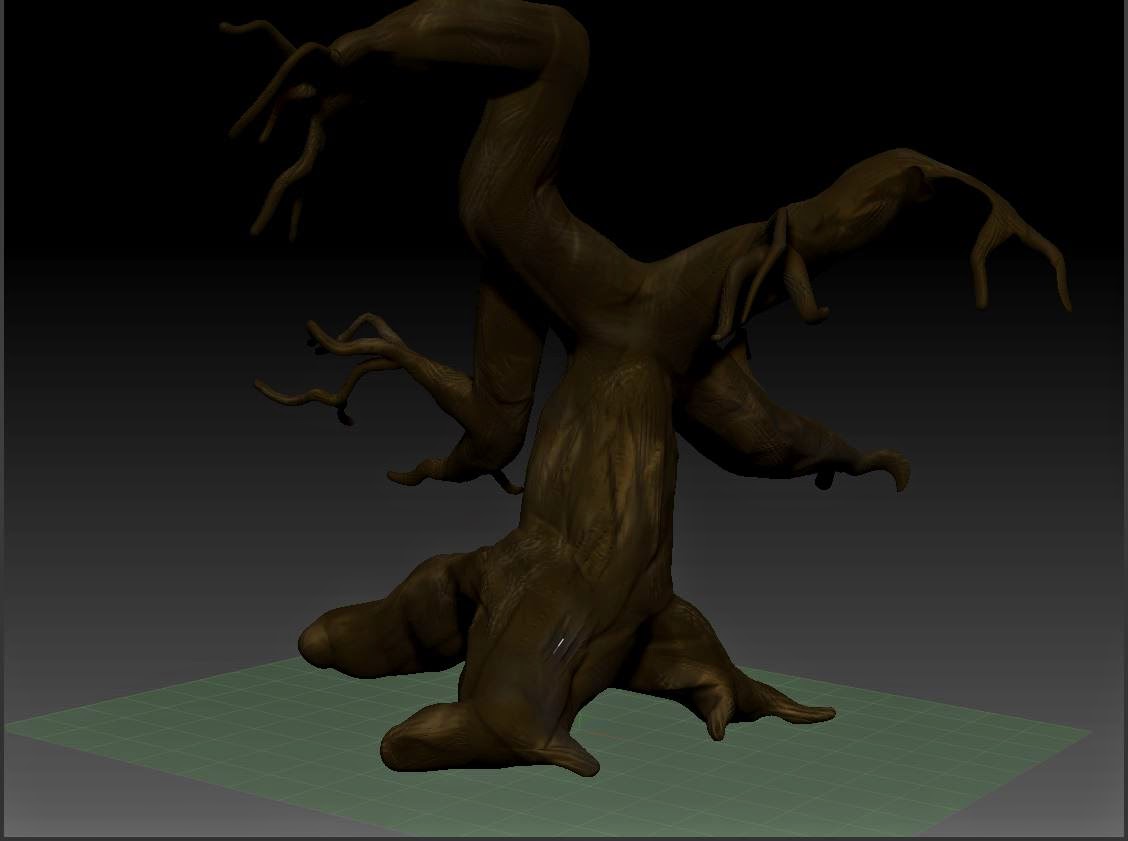 I made another tree and worked harder on the tree roots and general shape. 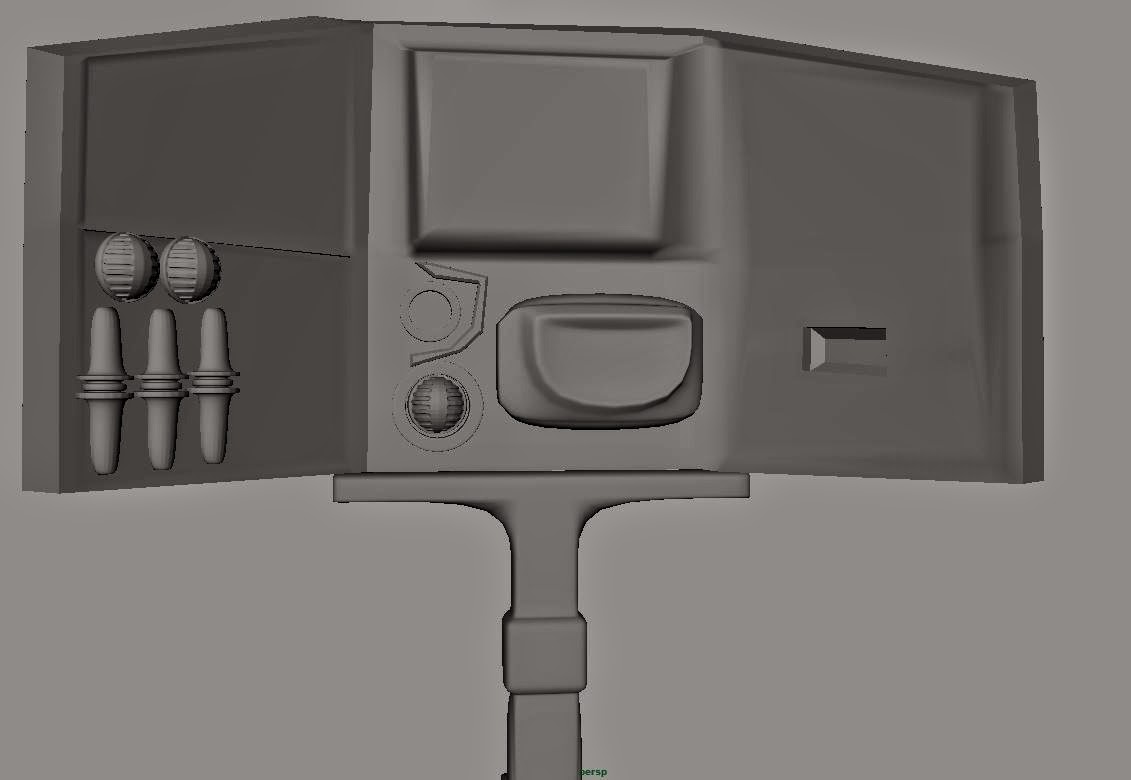 I did some modelling of a future like work station, was used to do transfer maps exercise, from low poly to high poly.

Posted by insert coin to continue at 06:59 No comments:

Bashed out a 3d organic model of a haunted tree in like 30 mins. Between League Queues.
Will be used as an assets in a game later on so stay tuned with that. Only probably another 9-15 tree's to do I reckon for starters and ill be happy. I'm committing pretty hardcore to this project so hopefully the fruit and the time I put in delivers.

I'm really trying to focus on producing work in a fast pace while being effective, while working
consistently to get better. So hopefully I can see some improvements in the future. 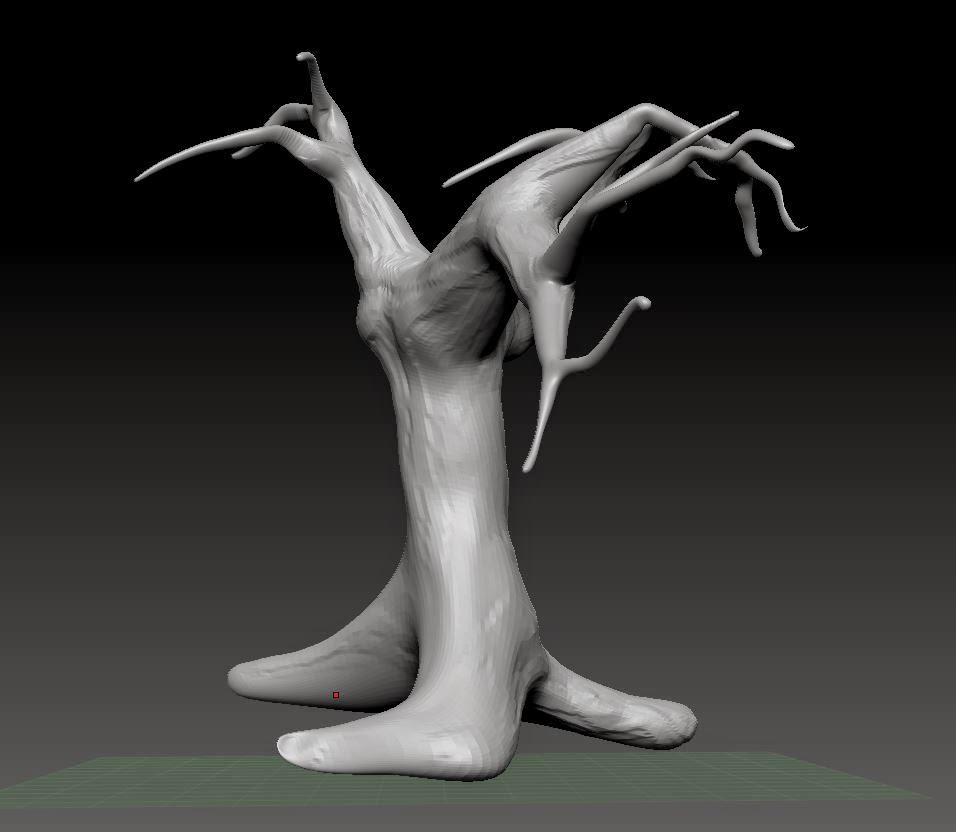 This was the base scalp in Zbrush. I'm really starting to enjoy this program. I wasn't happy with the roots in this particular item but I figure that in my animation or game I can easily hide it. 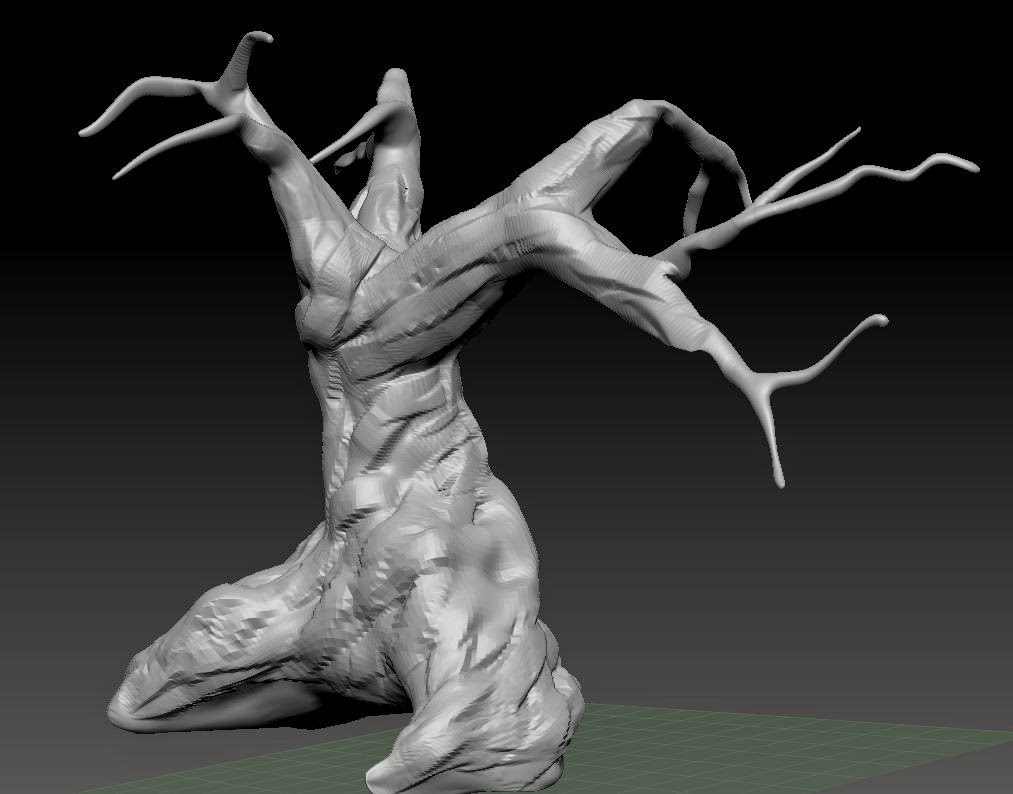 As I start ramping up the polygon count I went into a lot of detail with the ClayBuildUp tool in
ZBrush. It's fantastic the amount of detail that you can create is insane. I love it!! 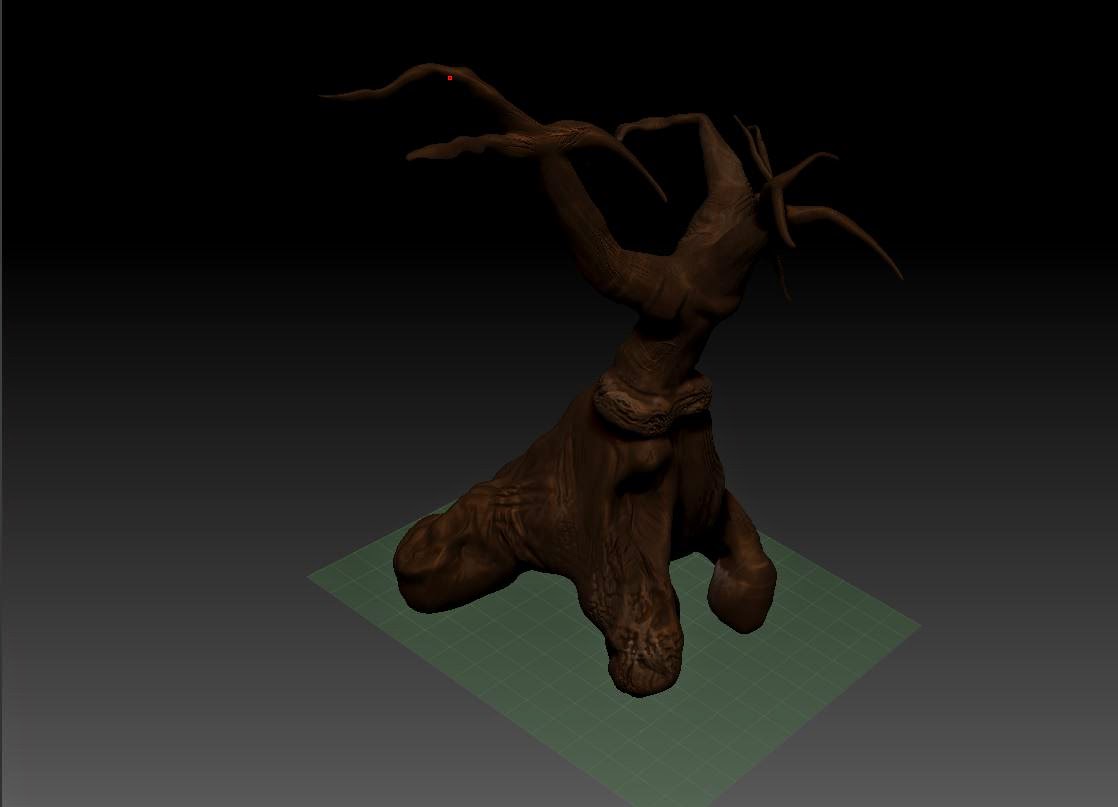 All in all so far I'd say I'm reasonably happy with the model in ZBrush. I really wanted to work
on the roots but i felt towards the end that it was basically polishing a shit and i figured that to get it really right i'd have to start over again. I'm really happy with the Alpha textures and detail and especially the branches but those roots man.. There shit!

Posted by insert coin to continue at 10:05 No comments:

Undisclosed Title and Work In Progress

I've been doing a lot of work at modelling in Maya and Z-Brush. Doing a lot of learning in my course and learning how to rig my cow so that I can animate it.

So I won't give to much away but you will definitely see some progress and a theme on going. So here's some very very early concept art that I've done over a couple of cups of coffee.

Here's my Concept for Evil Potato!! 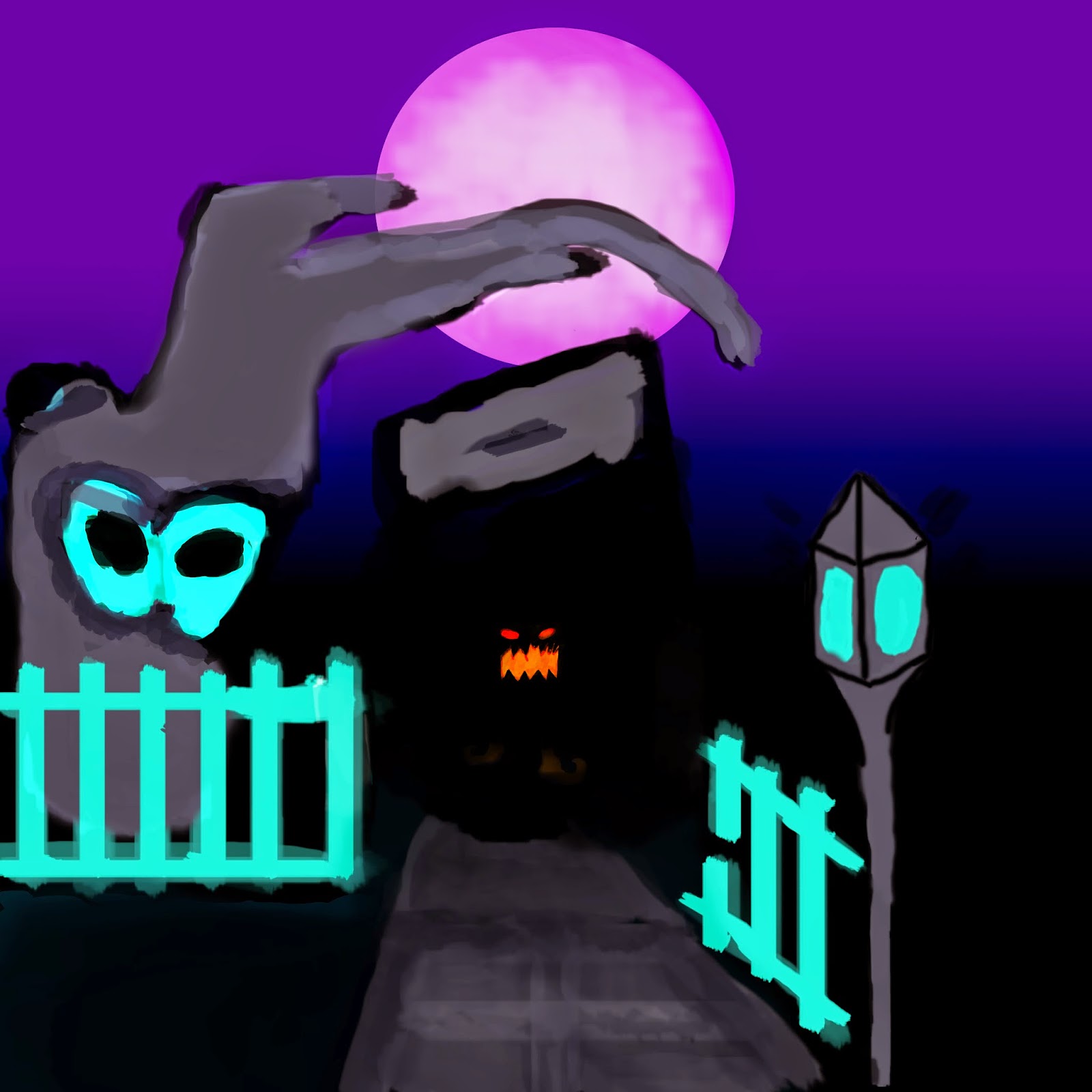 A mashed together scene with Evil Potato.. Was playing around with colours and tone for my game.
Wasn't really concerned so much on the look so far. 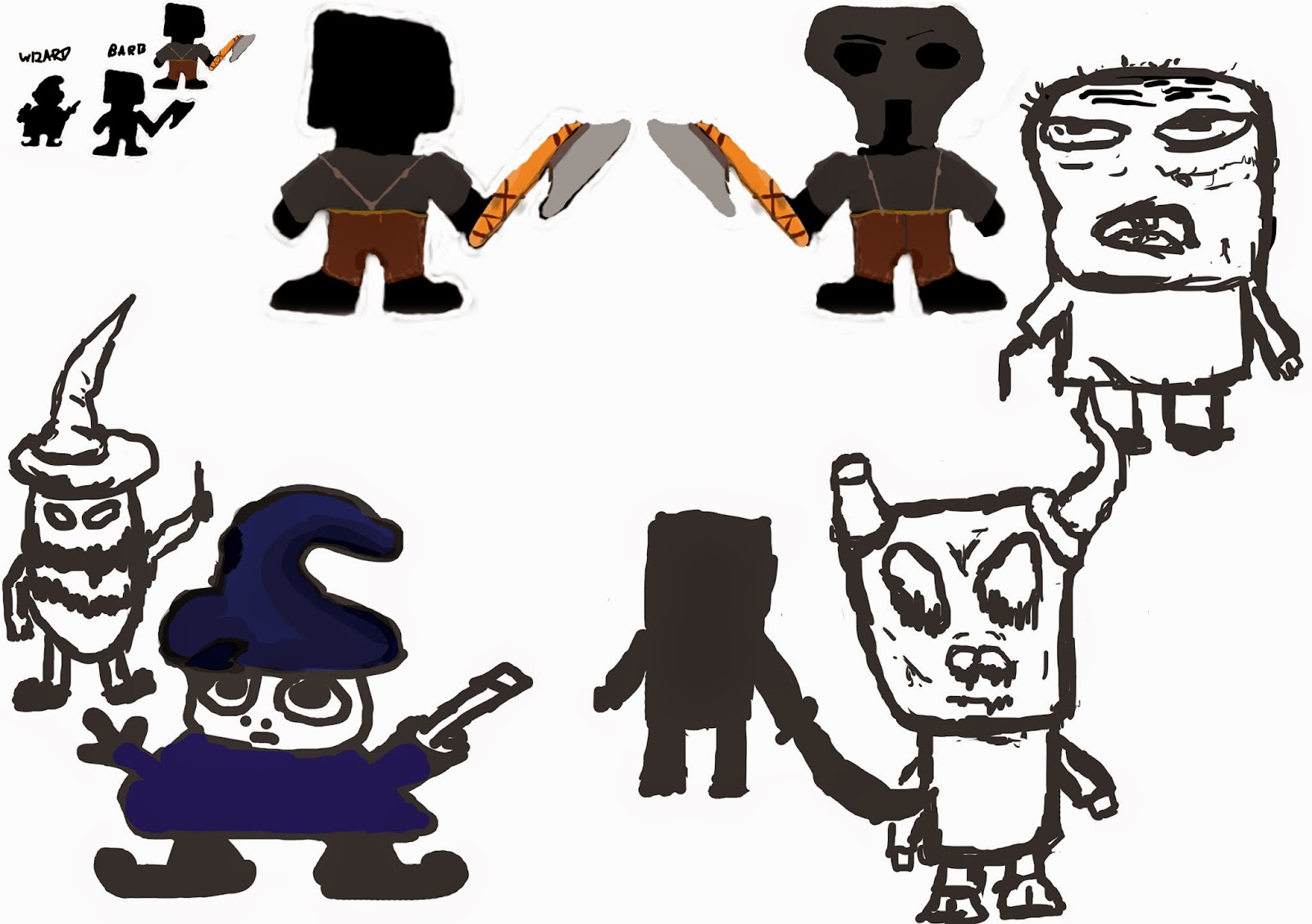 Some more silhouettes for design.

All of this was basically done in 45 mins just brainstorming characters and colour design while fuelled by caffeine.

Posted by insert coin to continue at 23:44 No comments: