Well I'm back from the states and started 2016 on the right foot. I recently took part in the Global Game Jam (GGJ) I worked on a team of two with my old man. As the programmers. I worked as the artists and my Dad worked on the programming. Because it was our first game jam ever working together and his first overall. We went with an easy concept of using a maze. If you completed the maze the ritual was completed if you finished the ritual failed.

In 48 hrs we produced a game i'm relatively happy with sure it's not 100% polished I worked on and built and modelled the level. I was happy until i did the totem pole head and by that point i was extremely tired. I also produced the maps in which the maze is used on.

Feel free to try the game out here or here.

Posted by insert coin to continue at 06:16 No comments:

So a lot has been happening. Finally finished studying was great to be done, learnt a lot towards the end and don't regret anything. Sadly I decided not to present at the expo as my project has spiraled into a massive full fledged game. I found that all the tech I had been working on in my little test scene was fast breaking the constrains of a simple wave-spawning game.

Lets be honest, It never was what I wanted but due to time constrains and the fact that I need to turn it into a game I had to squish everything down. But now I can break it out and let it breathe and be free. There are still aspects I'm not happy with such as art style and texturing but I know that just takes time.

I'm going to be working on this game over the next couple of months just getting things working and making a really sound portfolio as well as show reel. I'm basically going to position myself as not only someone who can make games but can program as well. That way I'm not relying on any one person to complete my pipeline.

Anyone onto the Update.

So it Start out as an in class assessment, where we had to design some icon's for achievements etc. I have to say. GUI and Simple Icon's I don't know it's not my forte. But I tried never the less so  I started playing around and ended up with a very simple style. Not overwhelming exciting but I tried to keep it all consistent.
Then I started with some C# and built my very own achievement system 100% my own work and coding and was super proud with it. It's the one thing I really enjoy is implementation. Even thou it's not entirely hooked up in the game I just have to right a couple lines of code but by pressing "I" in game brings up menu and I can test the achievement pop up with certain Keys. I made The GUI and menu to be as if it was on a table.

I'm thinking later on to see if I can animate GUI to the point that I want to rip the paper off the nails.
Something to look at :D 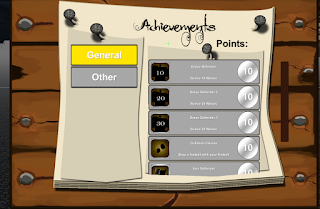 Posted by insert coin to continue at 15:43 No comments:

Texutring is one of those things that just takes time. The more time you put in the better it looks, You rush it well... it looks like shit. I've very slowly been working on the church asset I designed way back at the start of the year.

I really enjoy the brick texture I've managed to come up with. I probably need to work a little bit on the seams and repetition of it but all in all its getting there. Thanks to a class mate Michael. I've successfully mastered unwrapping like a mad man. I no longer fear it but enjoy it. Thou because this was one of my first models, and Stupidly I built it all in one piece it is a little tricky to unwrap to get the uv's to line up and not be distorted.

Posted by insert coin to continue at 09:22 No comments:

So I've finished my 1st humanoid character ever and 2nd Character Rig.

After much torture and pain with head topology. I'm slowly getting the hang of it, I'm still not 100% happy with this character but push came to shove and I really needed to start finishing aspects of for my game. He's not textured currently, That should be done hopefully by the end of the week. He's all rigged and animated thou and ready to be imported to my game.

I originally started with the theme of a blacksmith something like Gendry from GoT. But with a cartoon twist. Well I'm hoping my texturing can get me the result I really want, we shall see. I'm not to fussed thou because I've got a back up script ready for him anyway.

The character finally finished at:
4888 tris


Posted by insert coin to continue at 08:24 No comments:


So it's been a couple of weeks since I've posted anything. Been busy working on some undisclosed stuff and planning the future and all that jazz.

So to recap. Colleges and myself produced a game in 2 weeks. The theme that was voted on was "Get your arse to Mars." We went head to head against the other class on campus and worked tireless on the project in 2 weeks.

I was part of the art team.. Sad to say I felt the art team could of worked more efficiently but all in all i felt the product really turned out well. I had a lot of uneasy feelings towards this and mainly the collaboration between so many people, But I was happy to be proven wrong and the product speaks for itself.

The things I worked on during this product. I designed the shed in the background, (texturing was done by another student), Designed the rocket buttons and some of the upgrade buttons.

Be sure to check out our game and even give it a play test here.
It's been uploaded by Peter so check his other games out as well here.


Posted by insert coin to continue at 08:01 No comments:

So over the weekend we had a game jam! Our first one ever as group that had never worked together! 2 programmers and 2 artists, We had to publish a game within 72hrs, and we did it!

The concept was just simple bomberman style game. Where you are the grim reaper and harvest souls of fallen gamers. The angel tries to save them before they reach the "game over" screen! It's a simple time based game where you have to meet the quota of souls, if you don't you lose.

All in all it was a great learning experience! Definitely in the future I'll be doing it again. I felt our group worked amazing for never having been together. I'm hoping that in the coming weeks we decide to polish this up and make it truly 100% complete.

be sure to have a look at their work!

And more importantly have a play of our game here

Did a quick excerise in class on how to make a GUI health bar. I'd recently played around with the new Unity 5 canvas and UI element. But learning to do it really fast using photoshop and simple hardened bevel and emboss. All in all really great concept. 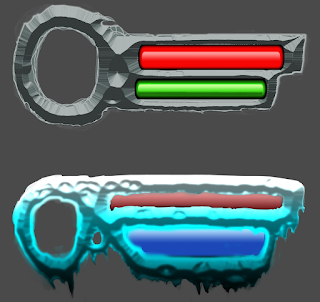 I tried to design to different styles. Went with a sort of Icy look and just a stock standard metallic and simple style.
Posted by insert coin to continue at 07:54 No comments: